I’m writing this post to remind myself how bootstrap sampling works. There are no proofs, only intuition, some quick experiments, and some comments.

One way to gauge the certainty of a reported result is to provide confidence estimates. This is something that bootstrap sampling can be used for, even though we only have access to a relatively small sample from the larger population of interest.

The key idea of Bootstrap sampling is exceedlingly easy. Let’s assume that the small population to which I have access, is representative of my larger population of interest. If I repeatedly sample subsets from the small population (with replacement), and I measure a particular statistic, I can simply report the interval in which this statistic falls some fraction of the time. This becomes my confidence interval.

where \(B\) is the number of simulated subsets I create. The empirical distribution of \(g\left(\mathcal{T_i}\right)\) is used to determine confidence intervals.

There is an implicit assumption here that the sampled data points are independent. In speech the use of speaker information in training systems will break this assumption if data points are individual sentences, many of which could have been spoken by the same speaker. Details about Bootstrap WER can be found here Bootstrap Confidence Intervals in ASR.

We construct bootstrap samples by sampling \(100\) points with replacement from \(\mathcal{T}\). 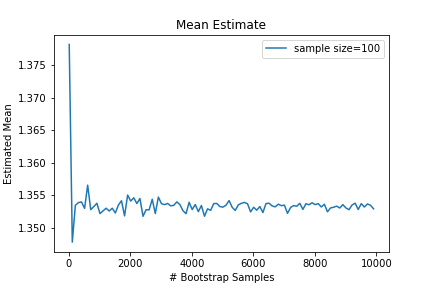 It seems only a few bootstrap samples are needed to achieve a stable estimate of the desired statistic, but if the computation is cheap, you may as well use as many as you can easily do. I’ve seen 1000-10000 recommended. 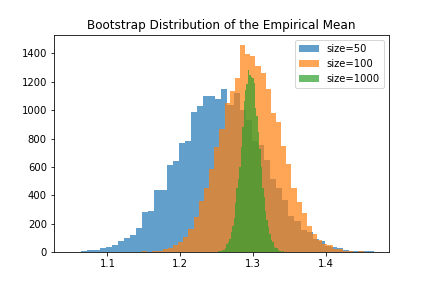 For anyone using Kaldi, the bootstrap confidence interval is computed by default using the script ./steps/score_kaldi.sh or the binary compute-wer-bootci. After running most of the kaldi examples you can find the relevant file in exp/MODEL_NAME/decode_DATASET/scoring_kaldi/wer_details/wer_bootci.

PhD Student at Johns Hopkins University in the CLSP